Despite celebrating May Day in pains, Anyim rekindles hope of Nigeria workers 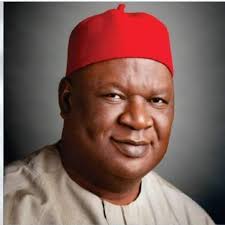 Frontline PDP presidential aspirant, Anyim Pius Anyim has lauded Nigerian workers for their steadfastness and determination to put in their best despite the harsh economic realities of the day.
Spokesman of the Anyim Presidential Campaign, Ahmed Buhari in a statement quoted the former President of the Senate to have lamented the downturn in the quality of the life of workers in the country caused by bad economic situation.
This he said has made the living condition of members of the Nigerian Labour Congress (NLC) and the entire working class both in the public and private sectors a nightmare.

Anyim cited high rate of inflation, underemployment, salary delays, and salary denials as some of the major economic challenges facing workers as well as myriads of non economic factors that have brought pains to workers in the country.

He applauded Nigerian workers for continuing to put in their best despite the difficult work environment and conditions, describing workers as genuine patriots.

He urged them not to be demoralised by the situation of things, assuring them that by the grace of God, the on-going political transition would enthrone a new government in 2023 that will be mindful of the plight of workers, competent in the management of economy and be able to reverse the pains of today.

Anyim who was a career public servant for many years said: “It is shocking how the living and working conditions of the Nigerian public and private sector workers have rapidly deteriorated in the last few years.”

“As I celebrate with you on the occasion of this year’s Workers’ Day, I share with you the pains and agony of Nigerian workers. On the one hand, uncontrolled inflation has wiped out the purchasing power of the civil and public servants as well as the private sector workers.”

“On the other hand, the deplorable state of the Nigerian economy has made it almost impossible to raise salaries and wages to a commensurate level with the Inflation rate, thereby putting workers in further quagmire.”

“And yet, many workers in the country are grossly underemployed and underpaid in the face of galloping Inflation.”

“In addition, the over-yoked workers, like the rest of Nigerians, are also contending with insecurity, exorbitant rents, poor transport facilities and dearth of other vital infrastructures.”

“Despite these militating factors, you have continued to work and create wealth for the country. This resilience, undoubtedly, marks Nigerian workers out as great patriots, who, given the right environment would be in the forefront of launching Nigeria into her rightful place in terms of development.”

“Your sacrifice shall not be in vain. I urge you take the ongoing political transition seriously and participate actively, so that by 2023, Nigeria will have a very competent government that will address all the challenges dragging the country down.”

“By the grace of God, I see a greater and brighter Nigeria emerging from the agonies of the present time”, the 2023 presidential aspirant stated.