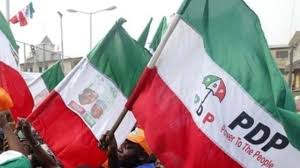 A non-profit, socio-cultural organization
on the aegis of Association of Ebonyi Indigenes Socio-Cultural in Diaspora (AEISCID), has warned the national leadership of the Peoples Democratic Party (PDP) against contempt of Court and manipulation by some ‘desperate politicians.’

The group which is interested in supporting and ensuring good and credible governance in Ebonyi state urged the leadership of the PDP to be firm, fair, just and consistent in maintaining its stand on the law.
According to the group, “Any attempt to allow itself to be muscled will lead to the crumbling of the entire cookies of the party in Ebonyi and is even capable of causing serious crises in our once peaceful state.
They indicated that the PDP would become a laughing stock if it fails to put it’s best foot forward in the mould of a rallying forces with immense capacity like Ifeanyi Odii and giving opportunity to capable men like him to return the party to power in 2023.”

In a statement released Saturday in Abuja by the President of the AEISCID Ambassador Paschal Oluchukwu, said the organisation considered it a grave injustice and unfair treatment to Chief Ifeanyi Odii, “the moves by Ogba and his co-travellers to mislead the NWC into ignoring a valid Court order originating from an Abakaliki Federal High Court on the matter of which primary election was properly conducted in line with the Electoral Act (as amended).”

The statement reads: “That we have carefully studied the unfolding political scenario in the PDP, Ebonyi State and the desperate antics of some amoral politicians since the October 16, 2021 State Congress during which some of the leaders selfishly imposed a certain Toochukwu Okorie who was hitherto unknown to both politics and the Party as it’s State Chairman. It is instructive to note that this was the genesis of the festering crises that has been rocking the Party in Ebonyi State. We wish to point out that the crises in the PDP is first and foremost a clear case of inability of former Senate President, Anyim Pius Anyim to show worthy and selfless leadership.

“That despite the hues, the cries and the outrages which the seeming leadership imposition made possible by the leaders of the Party such as; Anyim Pius Anyim, the South East Vice Chairman of the Party, Ali Odefa and their preferred choice Governorship aspirant, Sen. Obinna Ogba including some other National Assembly members which we gathered did not go down very well with some of the stakeholders and leaders of the Party, those behind the questionable conduct of unilaterally imposing a Chairman via a controversial State congress carried on as though they have become destructive agents who do not care about the unity, peace and success of the Party in the forthcoming 2023 general elections. This, AEISCID was made to understand was done in extant breach of some of the Party’s laid down guidelines and procedures.

“That expectedly and following this ugly development therefore, some aggrieved Party members approached the Court to seek redress and judgment was given in favour of Barr. Silas Onu returning him as the authentic Chairman of the Party in the State on the 13th of April 2022. The said verdict of an Abuja Federal High Court, we are also informed is being appealed in the Court of Appeal, Abuja division by the Okorie faction of the PDP.

“Ordinarily, we should expect that the decision of the National leadership of the Party to comply with the Court’s decision ought to have brought absolute peace, order and tranquility in the Party. But it is now obvious that some politicians who feel that they are above the law and the Party’s laid down rules and procedures began desperate moves not just to scuttle the Party’s unity in very desperate pursuits of their own selfish political ambitions. They have therefore carried on since then as destructive agents- making concerted efforts to ensure the law is thwarted and that the Party’s chances of returning back to power is ruined.
“That all of these uncanny conducts of a few selfish leaders and to an extent their followers have undoubtedly culminated and worsened the crises in the Party with the conduct of Party’s primaries ahead the 2023 general elections. It is therefore the reason behind the tussle for the Party’s ticket between Senator Obinna Ogba and business mogul, Chief Ifeanyi Chukwuma Odii and others. The supporters of the two factions of the once crises-free Party have all therefore tilted their loyalties towards the two camps.

“That since the crises escalated, we have dispassionately observed the unhealthy dispositions of the National Working Committee, NWC members who appear divided between the two warring camps jostling to fly the Party’s flag. The National leadership of the PDP, AESID cautions, should therefore be admonished to tow the part of the law and comply with only the Court’s clear pronouncements on this matter rather than pander to those who are pursuing their egoistic selfish gains, interests and agenda against those seeking the collective interest, unity and success of the Party in the forthcoming general election.

“That we have also noted with dismay the apparent hypocritical stand of some of the NWC who insists and have continued to prevail on Chief Odii who hails from Ebonyi South to drop his gubernatorial ambition citing zoning while working for the emergence of Sen. Ogba- an aspirant from Ebonyi Central Senatorial zone as against those who feel it is ordinarily the turn of the Northern part of the State to govern Ebonyi again. Yet, the same NWC placed competence and capacity far above zoning in the Presidential primaries it held a few weeks ago.”

While noting that the utmost concern of any political party in opposition should be the mobilization of men and resources towards ensuring that it returns back to power in 2023, Oluchukwu urged the party to place competence, capacity and popularity above ethnic or clannish interests to enable it bounce back.