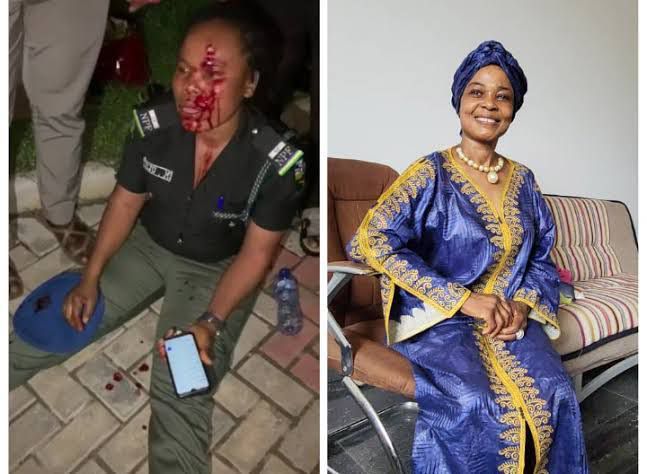 More reactions have continued to trail the alleged assault on a police woman, Teju Moses, by Prof Zainab Abiola for refusal to carry out house chore duties as two frontline human rights organizations, ActionAid Nigeria, (AAN), and Women’s Aid Collective, (WACOL), have condemned the barbaric act.
The two organisations held a joint media conference in Abuja over the alleged action by Prof. Abiola where they called on the Nigeria Police Force to as a matter of urgency review and clearly define duties of police orderlies and also for better welfare package.

The Country Director, AAN, Ene Obi, commended the effort of the Inspector General of Police, Usman Alkali Baba for for acting quickly in the arrest of Abiola, alleged to have ordered the assault on her police orderly, Inspector Teju Moses, through her domestic staff.

“You may recall that in 2020, ActionAid Nigeria, in solidarity with the Nigerian Youths, called for an end to police brutality across Nigeria” Obi said:

“However, with the same energy, we have been following with keen interest the continued rise in citizens’ brutality against security officers across Nigeria.

“Although, it is saddening that the perpetrator is a Lawyer and a human right Activist who should be advocating against all forms of abuses”

Obi explained that this will serve as a deterrent to all those abusing the rights of both male and female officers attached to them, that the eyes of the law are very active and justice will be served.

She maintained that one of AAN’s objectives is focus on protecting women and girls from violence and create opportunities for economic independence and decision making.

She called on the Inspector General of Police to Review as a matter of urgency, the welfare of the officers assigned on special duties as well as other police officers to avert future occurrences.

Also, the Founding Director, Women’s Aid Collective, WACOL, Prof Joy Ezeilo, asserted that the plight of Nigerians who are recruited by military and para-military organisations are attached to elites in the country including foreigners who do not only abuse them physically and psychologically, but use them in manners inconsistent with their line of official duty.

“The reported ugly and nefarious act of brutality is despicable and condemnable without equivocation. And to have been perpetrated by supposed civil society actor makes it far more reprehensible and exposes both the legal profession, the academia and the human right family to odium and embarrassment, considering the peculiar background of the suspect, Prof Zainab as a supposed trained and commissioned defender of human rights in the society” Ezeilo said:

She also maintained that WACOL in partnership with ActionAid remains committed to ensuring that human rights are safeguarded in Nigeria.

Prof. Zainab, was allegedly reported to have assaulted her police orderly on Tuesday, 20th day of September 2022, at her residence in Garki, Abuja, following refusal by her said orderly to carry out menial and domestic chores at her residence.

“The trending and viral audio clip available all over the social media showed the orderly, Inspector Teju Moses, bleeding profusely on her face, and which the media reported to crystalize ‘overwhelming evidence of culpability on the part of Zainab’.

“We must bear in mind that an inhuman act to one remains inhuman treatment to humanity and to all”, she stated.