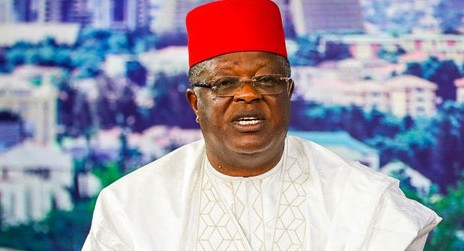 The Association of Ebonyi Indigenes Socio-Cultural In Diaspora (AEISCID) has asked President Muhammadu Buhari to call to order the governor of Ebonyi state, Dave Umahi, over the arrest of a two-term former member of the Federal House of Representatives, Hon. Linus Okorie, in the state.
The group also asked the Inspector General of Police, Usman Alkali Baba, to sack the Ebonyi state commissioner of Police, Aliyu Garba, for bringing the force into disrepute.
Okorie was reportedly abducted last weekend and severely tortured and then later handed over to the authorities of the Nigerian Police Force, Ebonyi State Command.
Reacting to the development through a statement released Thursday in Abuja, by the AEISCID President, Ambassador Pascal Oluchchukwu, condemned “the gestapo style in which Hon. Okorie was violently abducted, severely tortured and then later handed over to the police.
The group said it was privy to mainstream and social media reports on the incident including the tensions generated by protests from youths and women groups in Onicha-Igboeze and Ugwulangwu communities and of course, the Ebonyi Police Command’s press statement which listed among other allegations; illicit drug deals, character assassination, armed robbery, murder among others against the person of Okorie.

“Knowing the character persona of Governor Umahi and his despicable desperation to be in Nigeria’s 10th Senate even if it entails truncating democracy and governance in Ebonyi state, this group as a foremost governance and accountability platform in Ebonyi is worried that like we have always alarmed, Umahi and his APC warriors want to plunge our beloved State into an emergency rule through the use of Ebubeagu Security Network- an illegally armed body which had been ordered never to participate in any activities of the 2023 general elections.

“They have not only lost their popularity among the Ebonyi electorates a long time ago, they are now very determined to crush and grind anyone they perceive as a threat to their dangerous ambitions. Knowing that the APC Candidates in Ebonyi are widely unacceptable having been imposed by Umahi against the old APC members, the Governor and his evil schemers seem very desperate to foist them on Ebonyians through the instrumentality of the guns and large-scale violence using the ignoble Ebubeagu militia.

“Otherwise, how can the world explain the downright dehumanization of Okorie simply because he habours an ambition to vie for the Ebonyi South Senatorial seat in 2023 under the platform of the Labour Party against a very desperate Umahi? Why is Gov. Umahi afraid of facing the electorates in his Ebonyi South Senatorial zone especially when he claims to have done marvelously well for the people as an incumbent Governor?

“AEISCID as a group is even more troubled that State institutions such as the Nigeria Police Force, the Ebonyi Judiciary and others are enobbling these ugly and undemocratic conducts of Umahi. Saner minds had expected that the Nigerian Police, Ebonyi State Command should have been more professional rather than act a dangerous script handed over it by the agents of Ebonyi State government.”

While demanding immediate release of Hon. Okorie, the state said: “Assuming without conceding that Hon. Okorie was indeed arrested by Ebubeagu as claimed by the Police who by it’s Press release on the dastardly incident sheepishly acted like the official Spokesmen of the armed Ebubeagu militia group, why did it take them almost 24 hours to hand their victim over to the authorities of the Nigerian Police Force?

“The Ebonyi Police Command had curiously labelled many spurious allegations such as but not limited to; illicit drug deals, publication of false information, among others against Okorie in it’s Press release. Why then were those allegations dropped in the charge sheet they used to charge Okorie to Court?

“But for acting an anti-democratic script handed it by Umahi, how could the Police have charged Okorie before a Magistrate Court which has no proper jurisdiction so he could have been granted bail to face Umahi’s trumped up charges? These all points to the compromises of the Ebonyi Police Command under the CP, Aliyu Garba, the lackeys appointed as Magistrates and Judges in Ebonyi State Judiciary and indeed, the desperate foot-soldiers in Umahi’s government.”

The Ebonyi group, however, demanded “immediate sack of the Ebonyi State’s Commissioner of Police, Aliyu Garba by the Inspector General of Police for becoming a worrisome stooge in the hands of an insipidly desperate Governor Umahi. This body further demands the unconditional release of Hon. Okorie who has been immensely traumatized by this very sad incident.

“And for Umahi, AEISCID urges President Buhari to call him and his APC goons to order before they totally derail our maturing democracy with their desperate and dangerous ambitions!”