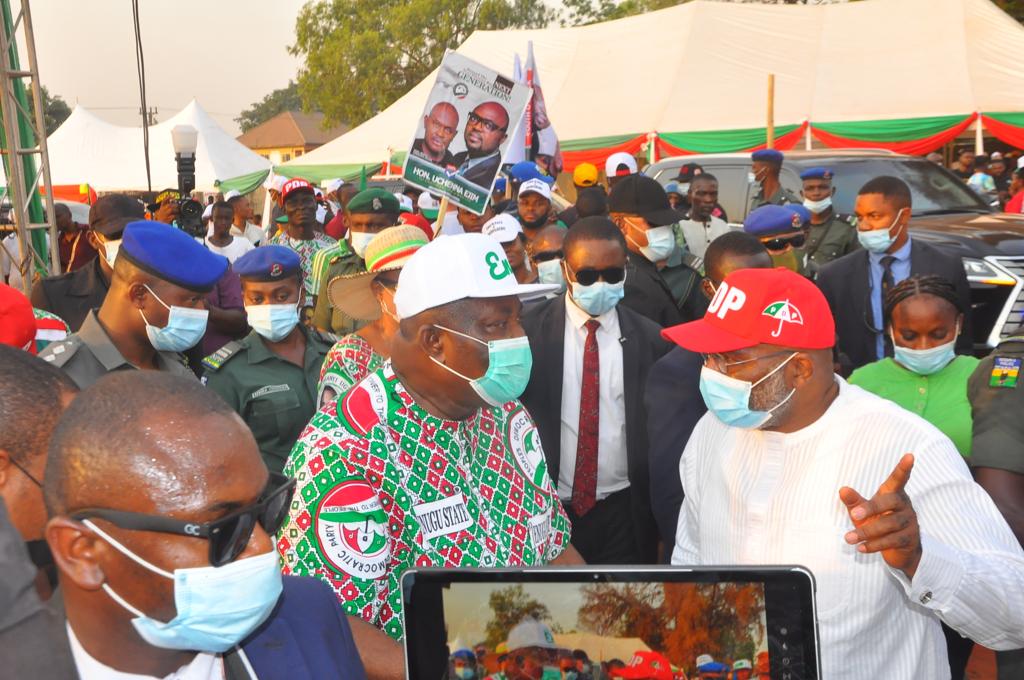 ***as Senator applauds Governor for inclusiveness

Governor Ifeanyi Ugwuanyi and Senator Chimaroke Nnamani have urged the people to remain steadfast in the propagation and sustenance of democracy as the elixir for development ahead of the February 23, 2022 local government elections in Enugu State.
The duo spoke at the mega rally in Isi-Uzo local government area of the state to flag-off the campaign for the election of chairmen and councilors in the 17 local government areas, that Enugu State has been consistent with the periodic conduct of elections into the third tier of government since 1999.Special adviser to the Senator on media Paul Mummeh in a statement he personally signed, noted that democracy is participatory and guarantees the interest and welfare of citizens just as he showered encomiums on Governor Ugwuanyi for raising the standard of good governance and inclusiveness in the state.
To further facilitate the conduct of the forthcoming elections, Senator Nnamani donated the sum of N25 million and another N3 million to encourage four female councilorship candidates in Nkanu East council area.According to the statement, the campaign train moved to Nkanu East and Nkanu West council areas where Senator Nnamani interacted with the crowded audience, urging them to vote for the PDP candidates in the elections.. “The excitement of the people echoing “Chimaroke!, Ebeano!! Ebeano! Ofeanuo Ugwuanyi rented the air.
An emotion laden Nnamani again paid glowing tribute to Ugwuanyi whom he said rescued him from political exile after his experience from former political associates when he left office as governor 15 years ago.
He said: ”The lesson is that nwanne di na mba meaning that a brother can be found in a distant land and nobody knows where succour will come from”.
Nnamani therefore urged the people to continue to support Ugwuanyi as a leader with good mission and purpose to uplift the people, describing him as a consensus builder.
He reminded them to take the local government elections seriously because it is like a rehearsal for the 2023 general elections..“We need to win emphatically and convincingly. We must consolidate ahead of the 2023 governorship, legislative and presidential polls. We shall line behind our Governor to give us direction”, Nnamani stated.
Governor Ugwuanyi on his part urged the electorate to vote for the PDP candidates in the 17 local government areas assuring that they (the candidates) will serve with unwavering commitment and fear of God.
He was however quick to warn them in advance to be ready to reside in their local government areas when elected saying “it is a way of guaranteeing security and improving the economic fortunes of your constituents”.
The PDP has remained the dominant political party in Enugu state since 1999, producing successive Governors, Senators, House of Representatives and State House of Assembly members as well as council chairmen and councilors .
Nnamani is expected to move the campaign train to Enugu North, Enugu South and Enugu East local government areas this week.