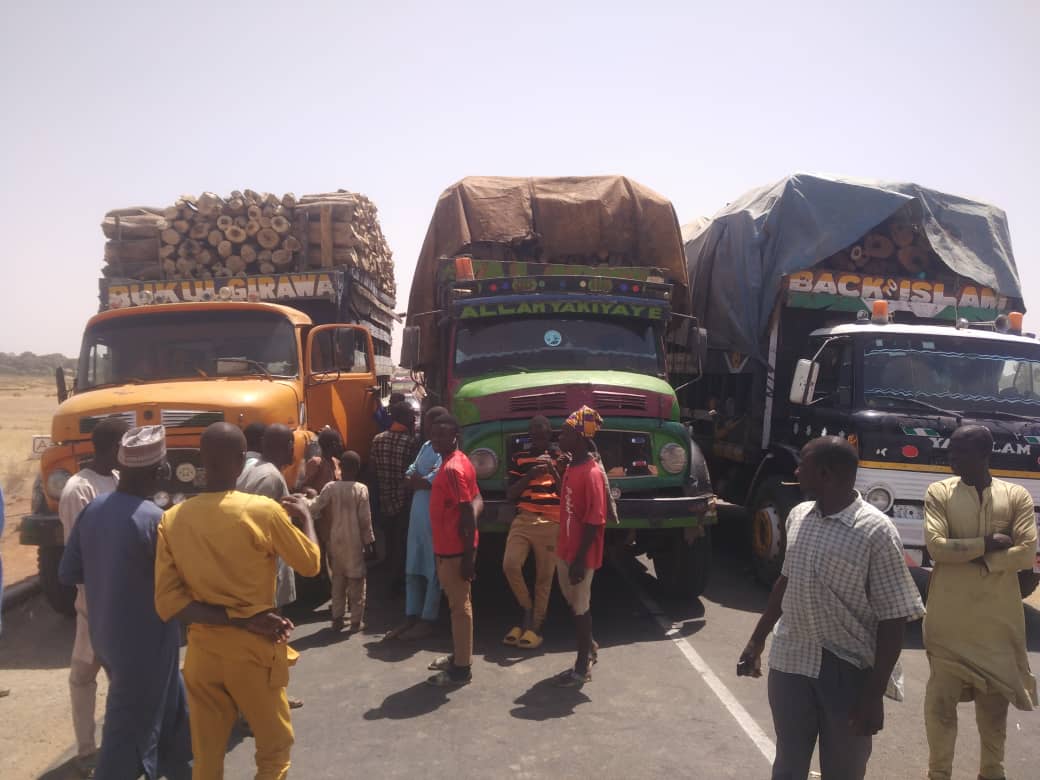 Barely 48 hours after Jigawa state governor, Alhaji Muhammadu Badaru Abubakar raised the alarm over the delapidation of federal roads in Jigawa state, Communities in Gwaram local government area of the state have blocked Gwaram-Darazau road in protest against government’s inaction over the bad shape of the bridge along the road.

The youths in their hundreds in the wee hours of Friday blocked the Gwaram-Darazau road that links the Northwest to the northeast geopolitical zone to show their concern on the government lackadiasical attitude on the Gwaram bridge which has been damaged since the 2021 rainy season.

Trucks and other vehicles were seen on both sides of the road after being prevented from plying the road by an irate youths.

Speaking to newsmen, the leader of the protesters who gave his name as Baban Fati a driver in Gwaram town said “people are here to expresses their concerns over the government’s lackadaisical attitude on this bridge which has been damaged for a long time and nothing has been done”.

According to Baban Fati “What provoked the people is that early this week we woke-up and saw an iron barricades which prevented trucks from crossing the road. With this barrier the supply of fuel, foodstuffs and other goods being conveyed by truck stopped”.

He said the prices of foodstuffs, fuel and building materials have skyrocketed “The Problem affected the entire Fagam state Assembly constituency and parts of Darazau local government in Bauchi state”.

Commenting through his mobile phone on the matter the Jigawa State commissioner of Work and Transport, Engineer Aminu Usman said “the bridge got damaged during the last rainy season.
He also indicated that the bridge continued to sink as a result of articulated trucks laden with heavy loads crossing it.

The works commissioner who spoke through the permanent secretary in the ministry, Engineer Datti Ahmed added that “government erected the barrier to prevent articulated vehicles laden with goods from crossing the bridge to prevent the total collapse of the bridge”.

He called on motorists and people in the area to exercise patience with the situation for a while as he assured them of immediate government action.

It would be recalled that the state governor Alhaji Muhammadu Badaru Abubakar on Wednesday said “the worse roads in Jigawa-are federal government owned roads.

The governor made the assertion in his speech delivered at the Northwest geopolitical zone of Presidential Enabling Business Environment Council’s (PEBEC) meeting held at Ahmadu Bello hall in Dutse the Jigawa state capital.