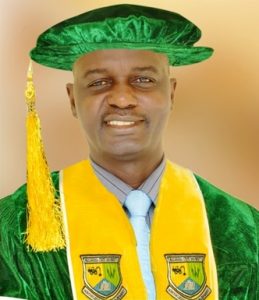 National Association of Kogi State Youths (NAKSY) has passed a vote of confidence on the Vice Chancellor Federal University ,Lokoja Prof Olayemi Akinwumi.
The group also used the medium to warn individuals and groups to desist from promoting the Pull Him Down syndrome, stressing that the growth of the institution should top priority of every stakeholders.
A press statement signed by the NAKSY president Comrade Destiny Ibrahim has disclosed
The statement further revealed that within his one year in the office, the VC has made tremendous achievements and as such needs the support of all and sundry to enhance development of the institution.
According to NAKSY, some of the achievements of the VC includes; introduction of college of Health Sciences, Faculty of Engineering, embarked on Resources Verification of 30 programmes, brought FUL to the first position among the 12 Federal University established by the government of GoodLuck Ebele Jonathan.
He noted that the VC also fulfilled the vision of the founding fathers of Federal University Lokoja, carried out staff auditing, made brilliant appointments and Institunalised the university’s culture of inugural Lectures and public Lectures.

The youths also used the medium to commend the Board Members of the university for the choice of the newly appointed Registrar for the institution; just as they enjoined stakeholders to join hands with her for effective service delivery.
In line with the achievements amongst other things, NAKSY pointed out that it was the first time an indigene of the state is being appointed as the VC of the university and hence would not tolerate moves by certain individuals or group targeted at distracting the good work he had started.