Zamfara 2023; Abu Gusau to the rescue 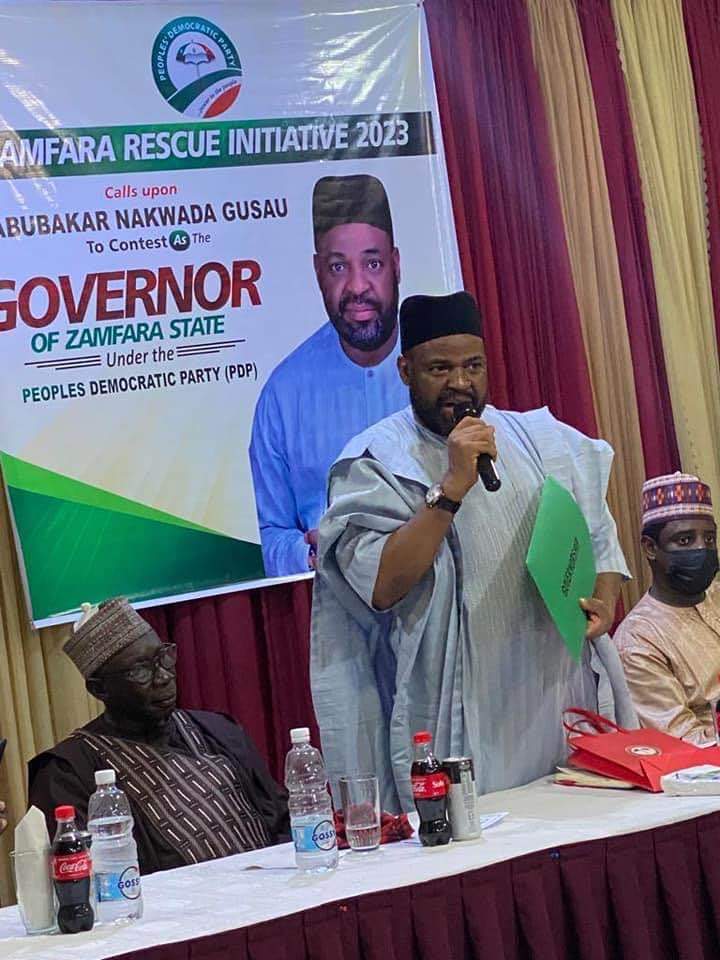 As the election year 2023 draws closer, political gladiators all over the country are already galvanizing and rallying support for candidates of their choices.
In Zamfara state the situation is not different, the citizens have been clamouring for Abubakar Nakwada Gusau, to throw his hat in the ring to contest for the plum job of governor in the State.
Recently in Abuja, a group under the aegies of, “Zamfara Rescue Initiative” a political movement made up of concerned politicians across party lines, top business class, youth leaders, indigenes of the State in the diasporas, friends and well- wishes of the people of Zamfara state, converged in Abuja on the mission
to rescue their dear state from hopelessness and underdevelopment.

The Initiative expressed the believe that the time has come to re-engineer Zamfara state by identifying and supporting a credible candidate to run for the office of Governor in the forthcoming gubernatorial poll in 2023 regardless of political affiliation.
As it were and after a painstaking process across the length and breadth of the state, several prospective candidates were scrutinized. The Initiative identified Mallam Abubakar Nakwada Gusau, whom they requested
to consider and accept to run for Governor of Zamfara state in 2023 election under the platform of the People’s Democratic Party ( PDP).
In giving effect to this resolution, the Initiative sought for contributions from its members and raised funds to purchase the expression of interest and nomination forms from the PDP National Secretariat in Abuja.
According to the group, since creation in 1996, Zamfara state had fallen short of expectations owing to lack of meaningful development due largely to a deeply entrenched leadership vacuum. Prior to it’s creation, Zamfara was one of the top three commercial centres in northern Nigeria.
There were textile industries, cotton ginneries, confectionery factories, oil Mills that provided employment for the large teeming youth population. Today the above edifices are nothing but historical artifacts with the state economy virtually grinding to a halt resulting in unprecedented levels of poverty and deprivation across the state.
The insecurity pervading the state is better imagined than described as armed bandits have brought untold hardship and misery to the people denying them peace and theur livelihood of farming.
Other problems confronting the state which were of great concern to the group are poor infrastructure and personnel across the state. Also worrisome is the health sector grappling with lack of conducive environment, trained personnel and drugs.
The group is convinced that with the support of a wide spectrum of committed Zamfara citizens, Mallam Abubakar Nakwada Gusau is the right person to lead the transformation of Zamfara come 2023.
The man in question is a house hold name in the state being a pioneer member of PDP from 1998 to date.
He has impacted on many people in the course of his carrier spanning both public and private sectors.
He served in the Ministries of Transport, Civil Service Matters, Education and Health as personal and Special Assistant to two Honourable Ministers from Zamfara state.
He also served in a top position at the Nigerian Maritime Authority. He was also the Zamfara state SURE-P Co-ordinator, Mallam Abubakar Nakwada Gusau ensured that youths were empowered.
In his stint in the private sector, Abubakar served as the Regional Manager of V- Mobile Network.
History has a way of repeating itself as Abu Gusau’s struggle for people’s emancipation started way back during his undergraduate days in the famous Usmanu Danfodiyo University Sokoto where he served as President of the Students Union Government (SUG)
These and other qualities distinguish Mallam Abubakar Nakwada Gusau a unique and ralling point/candidate for the Zamfara Rescue Initiative.
Having presented the Expression of Interest and Nomination Forms to Abu Gusau for the office of Governor of Zamfara state in the 2023 general election by the Co-ordinator of Zamfara Rescue Initiative Alh Bello Musa Gusau, the die is cast.