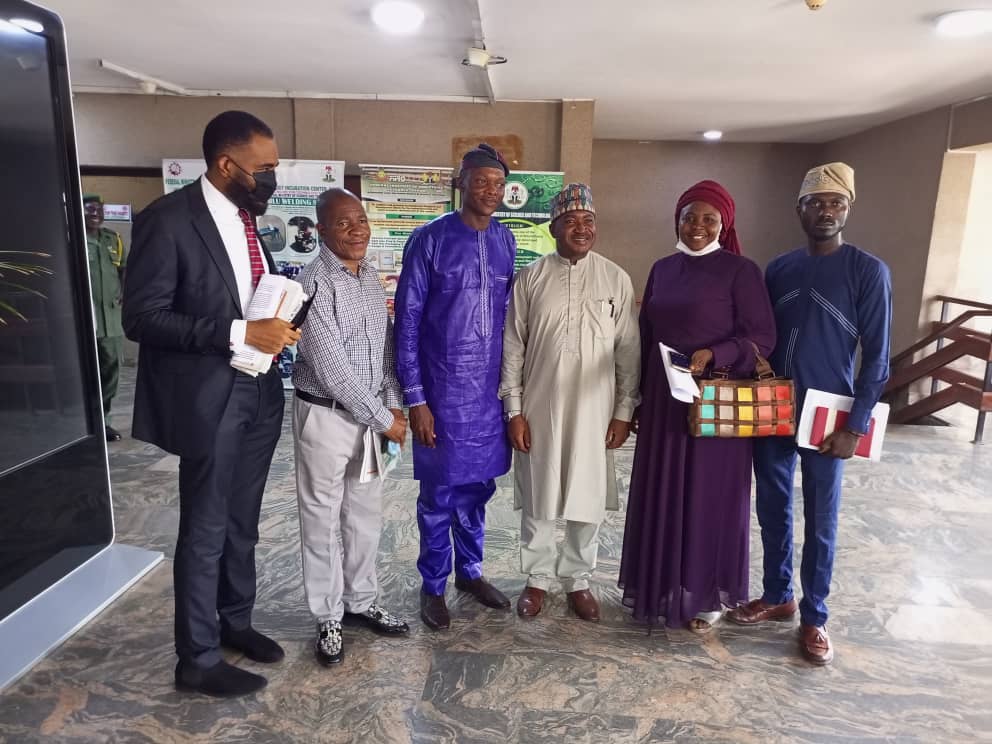 A group under the aegis of Patriots for Dr Ogbonnaya Onu led by Prof Hakeem Fawehinmi on Thursday paid the
Minister of Science and Technology, Chief Ogbonnaya Onu a courtesy visit in Abuja to prevail on him to join the 2023 presidential race.

They expressed the optimism that Onu is the most suitable person who can bring about the advancement of Nigeria and the improvement of the wellbeing of her citizens.
In what seemed like his positive response Onu on Friday morning declared that he was joining the presidential race to slug it out with the array of other aspirants for the presidential ticket of the ruling All Progressives Congress (APC).

The former Governor of Abia State said Nigeria can not continue with the ‘cap in hand’ mindset, looking out to foreign countries for its survival.

Onu harped on the fact that Nigeria has the key to unlock its own prosperity.
He therefore asked his party and the electorate to elect him as Nigeria’s “Chief Servant”.

He recalled his days as governor of Abia when the state provided free treatment in public hospitals.

Apart from the health sector, the minister said Abia witnessed development across all sectors of the state.

“As a man of great compassion, and also believing that women are great builders of nations, I did not want any pregnant woman or child to die either during pregnancy or child birth, which are the most challenging periods in any woman’s life, just because the woman cannot afford to pay hospital bills. Hence, all pregnant women received free treatment in public hospitals,” the presidential hopeful said.

“I want all Nigerians, particularly the youth to know that Nigeria has a bright future. Let there be nothing that can make any Nigerian lose hope about the future of Nigeria.

“The Almighty God that created us, gave our dear nation, everything that she needs to be a leader in the world. Working together, we will make use of knowledge economy driven by STI to make Nigeria truly great.

“My fellow Nigerians, we have the key to unlock the prosperity of our dear nation, and this key is a knowledge economy driven by science, technology and innovation.

“This is so, because no nation has ever become truly great, whether in ancient or modern times, without the efficient and effective deployment of science, technology and innovation to nation building. I am convinced that I have the knowledge, the experience, the credibility, the education having been trained in one of the best universities in the world, the vision, the integrity, maturity and a man who can be trusted.

“I most respectfully ask my political party, the APC, to elect me as its presidential candidate, and the people of Nigeria to elect me as the president of the Federal Republic of Nigeria, for me to be the chief servant of the nation.”

Fawehinmi who is a professor of clinical anatomy and biomedical Anthropology of the University of Portharcourt had observed that Nigeria is going through perilous times and more than ever before needs an experienced and dynamic leadership with the capacity to pull her from the brinks.
“We are here today to beckon on a non-sentimental silent achiever, we so much believe in, to throw his hat into the ring and contest for the highest office in the land on the platform of the All Progressives Congress (APC).

“While we expect the Independent National Electoral Commission (INEC) to conduct a free, fair and credible election that will respect the aspiration of the Nigerian masses, there are key attributes a presidential candidate is expected to possess to make him suitably qualified to occupy this coveted office.
“Nigeria at this precarious time needs a detribalized leader that will foster unity, put the interest of all Nigerians above sectional interest, fight endemic corruption frontally, tackle widespread insecurity pervading the land headlong and prosper the lives of its citizenry through economic emancipation and job creation.
“Amongst the contenders that have openly declared their intentions to contest, these requisite attributes stand you out as the most formidable with sterling performance over the years.”
According Fawehinmi, the Federal Ministry of Science, Technology and Innovation under his watch have made remarkable progress and giant strides.
“On assumption of office in November 2015, you increasingly created awareness on the importance of Science, Technology and Innovation to nation building through programmes such as the Annual TechExpo, adoption of Science, Technology and Innovation to drive Economic Diversification, Commercializing some of the research findings by your Agencies, Patenting many of them as ways of job creation, reducing capital flight by a reduction in the overdependence on imported goods and thereby strengthening the naira.

“Dr Ogbonnaya Onu has facilitated the signing of Executive Order 5 by the President to boost local content and move the economy to a knowledge-based one. He has revitalized and inaugurated the National Research and Innovation Council (NRIC) to serve as a driver for economic development: and infused Science, Technology and Innovation into the Economic Recovery and Growth Plan (ERGP) of the federal government. “His Excellency values the youths and has instituted an Annual National Science, Technology and Mathematics Competition in all the 774 Local Government Areas as a way of nurturing young talents and future scientists and award scholarships and start-ups to the brightest minds.”
According to the leader of the group Onu has been an indigene of 3 South-Eastern States (Imo, Abia and Ebonyi) at different times, with a political career that spans over 3 decades and is the most senior political office holder amongst all the aspirants currently jostling for job. “During your tenure as the first civilian Governor of the old Abia State in 1991, you meritoriously served as first Chairman Conference of Nigerian Elected Governors.
“His Excellency is sound in mind and body and one of the most educated aspirants having bagged a First Class honours degree in Chemical Engineering from the University of Lagos and a PhD from the reputable University of California, Berkeley, USA.
“In the academia, you were pioneer Head of Department of Chemical Engineering and Member of Senate and Governing Council of the University of Port Harcourt before your foray into politics.

“As foundation member of the All Nigeria People’s Party (ANPP) and National Chairman, you carried its flag in 2013 to the union with the Action Congress of Nigeria (ACN) and the Congress for Progressive Change (CPC) along others to form the APC. “When you won the election as the presidential standard bearer of the APP in 1998, you forfeited this ticket to Chief Olu Falae who contested under the AD/APP joint platform due to your belief in the unity of this country. “This move was to assuage the feelings of the Yoruba in their yearning for the presidency due to the annulment of the June 12, 1993 presidential election convincingly won by Chief MKO Abiola.
“As National Chairman, most of ANPP’s presidential candidates were from the North and your character stands out as one of the very few politicians pre-2015 that remained in the opposition despite its deprivations, because of your diligent and principled nature. It is noteworthy that of the three major political parties that merged to form the APC, the ANPP stock appears to have been most short changed in the tripartite power sharing equation.

“A multicultural society like Nigeria requires a nationalistic leader and technocrat like Dr Ogbonnaya Onu that can be entrusted with its unity and treasury and can provide a transformational leadership devoid of sentiments and rancour. “You have never had a brawl with the anti-corruption and security agencies, and this gives you the moral justification to fight corruption. His Excellency prefers meritocracy to nepotism as a way of earning the confidence of the people, and has demonstrable capacity to work with every Nigerian irrespective of religious or tribal persuasion.
“This political sagacity, requisite experience, managerial acumen and comportment will earn him the respect of the government and people.
“Egalitarianism cannot be fostered when a major segment of society is nursing a feeling of discontentment.
“His election will assuage the feeling of real or perceived marginalization among the Ndigbo that constitute about a quarter of the population, guarantee their full re-integration into the post-civil war Nigerian state and end their agitation for socio-economic and political emancipation, as happened to the militancy struggle in the South-South with the election of Dr Goodluck Jonathan as President in 2011.
“It will give the civil war veterans including former Heads of State a sense of fulfilment, seeing their dream of a truly unified Nigeria which they have fought for, materialize in their lifetime.
Therefore, political and opinion Leaders should make a clarion call to all well-meaning citizens to synergize, pull resources together, build bridges across party lines and rally support from the various regional interest groups for Dr Ogbonnaya Onu.
“He has been projected as the ideal President for Nigeria come 2023 as he belongs to an endangered species of statesmen who can galvanize all facets of this country and provide the much needed modern day progressive leadership.
“The election of Dr Ogbonnaya Onu as President will sustain the existence of Nigeria as an indivisible entity.

“The APC should therefore put its best foot forward and adopt Dr Ogbonnaya Onu as its consensus presidential standard bearer in its legitimate quest to retain power at the centre post-2023, as he is not only acceptable to the Ndigbo and APC, but to all Nigerians due to his broad appeal for which the majority of voters will coalesce.
“This worthy course if left to slide can only be realised in the next 16 years with the sustenance of the current democracy.
The Patriots are passionate about you taking the mantle of leadership of this great country and piloting its affairs and lead us to the promise land.
We beseech/implore you to declare for the race and urge the ruling APC to adopt you as its consensus candidate as Victor Hugo once said that “there is nothing as powerful as an idea whose time has come” and that is your Excellency’s declaration. We rest our case!”