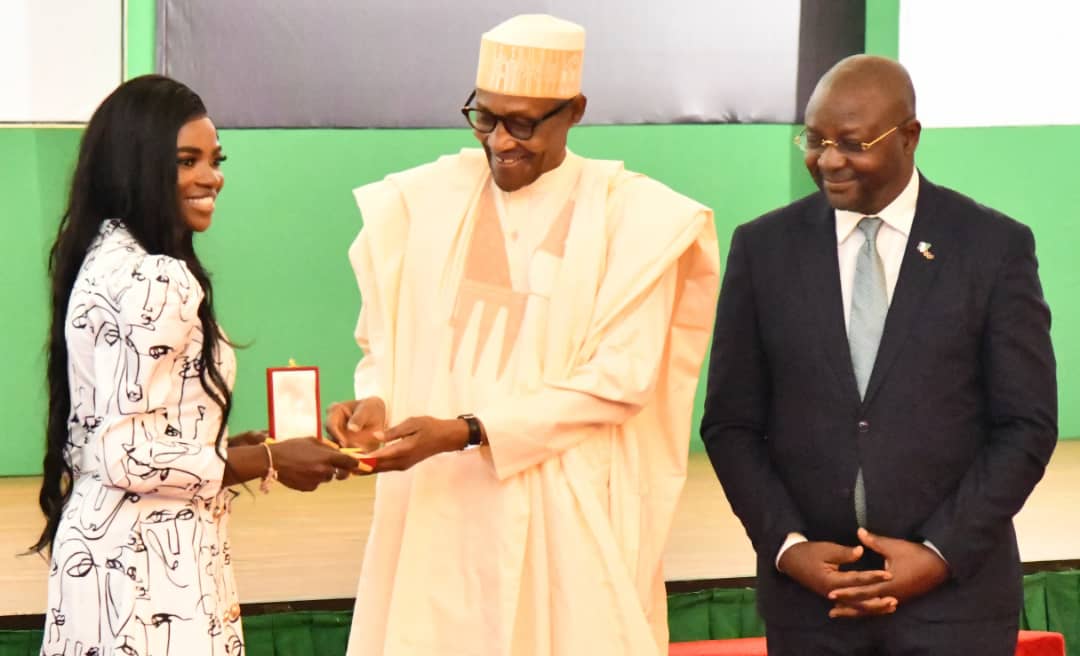 According to the Statement, Buhari the gave gave the awards on Thursday at the Banquet Hall, State House, Abuja during the Presidential Reception held in their honour to appreciate them for their podium performances at the competitions.

He stated that the present administration is committed to rewarding excellence, especially for members of such a heroic team who succeeded in putting smiles on the faces of Nigerians through their conquests that lifted the name of the country high in the global world of sports.

While applauding the athletes whom he described as champions and worthy ambassadors, the President said, “you are indeed our dear Nation’s heros and heroines, you have distinguished yourselves with worthy ambassadorship of the Federal Republic of Nigeria.”*

He explained that the contingents’ outstanding performance had gone a long way in projecting the positive image of the country among other nations. “I watched with millions of Nigerians those exciting moments when you all brought smiles to us and our homes by breaking world, national and games records, as well as achieving personal bests in your career” the President said.

President Buhari maintained that these feats have done the nation proud at the Games and Championships, as their exploits led to the singing of the nation’s anthem 12 times in a period of 14 days before a massive viewing audience across the over 210 countries and territories of the world.

This he added, is consistent with the determination of a nation which is always yearning for excellence.

The President who noted that the awards will further spur more Nigerian athletes into striving for greater heights, commended the Management and Staff of the Federal Ministry of Youth and Sports Development, National Olympic Committee as well as the Coaches for their resilience in ensuring that so many laurels were won for the country.

He assured that his administration will continue to create an enabling environment for the development of sports as a business.
The President called on private individuals to partner with government by investing in sports with a view to empowering Nigeria’s teeming youth thereby making them self reliant, self employed, thus contributing to the socio-economic development of the country.
Earlier in his opening remarks, the Honourable Minister of Youth and Sports Development, Mr. Sunday Dare, stated that the year 2022 has become an outstanding year in the history of Nigerian sports and as such, cannot be forgotten in a hurry.

“It is a year where many Sporting Federations have surpassed and are surpassing their previous performances. It has also become a year where many athletic records were broken. More is expected. It’s quiet a long list” he said.

Dare therefore called on all Nigerians to accord the athletes with praise, recognition and appreciation for their sacrifice, talents, consistency, commitment, discipline, focus and above all, patriotism.

He added that they have undoubtedly brought glory to the nation.

The Minister commended the President Muhammadu Buhari-led administration for its commitment to the development of youth and sports in the country as well as laudable initiatives, like the Adopt-an-Athlete project which has birthed a new trajectory in sports and athletes’ performances

In a goodwill message, the Secretary to the Government of the Federation, Mr. Boss Mustapha, urged Nigerian athletes to continue to justify federal government’s investments in sports by striving to keep the nation’s flag flying in the comittee of sporting nations.

Also, the Honourable Minister of Women Affairs, Dame Pauline Tallen, in a good will message at the event, thanked the female athletes for doing the nation proud and urged more women to rise to the challenge of contributing to the development of the country, not only in sports but in their various fields of endeavour.