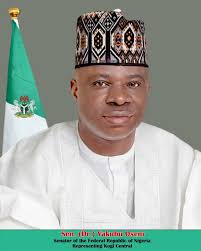 The Senate has given approval to the establishment of the Institute of Information and Communication Technology Iwo, Osun State.

The endorsement came following the presentation and consideration of a report on a bill to establish the Institute by the Committee on ICT and Cyber Security.

The Chairman of the Committee of, Senator Oseni Yakubu (Kogi Central) laid the report after presentation.

Senator Yakubu in his presentation, said the bill which consists of 25 Clauses and 1 Schedule, seeks to establish the Institute to provide full-time and part-time courses of instruction and training in Information and Communication Technology and other related fields of study, and to make provisions for the general administration of the Institute.

He disclosed that out of all submissions received from stakeholders on the bill, only two were opposed to it.

According to the lawmaker, “while the National Information Technology Development Agency (NITDA) vehemently opposed the bill, the Ministry of Communications and Digital Economy opposed it on one hand, but conceded that should the bill be passed and assented to, the institute should be domiciled under its supervisory authority.”

“However, all other stakeholders supported the bill, opining that the establishment of the Institute would not only be of immense economic advantage to Nigeria, but also alleviate the challenge of inadequate manpower in the ICT sector, and thereby make room for improved job opportunities and employment generation”, he added.

The bill was thereafter passed after consideration by the Committee of the Whole.

In a related development, the Senate during plenary re-considered and passed a bill seeking to establish the Federal University of Education Aguleri, Anambra State.

This followed a motion for the bill’s re-commital moved by the Senate Leader, Yahaya Abdullahi (Kebbi North).

The Senate Leader recalled that the Federal University of Education Aguleri, Anambra State (Establishment) Bill, 2022 was passed by the National Assembly and transmitted to the President for assent.

He observed that, “some fundamental issues which require fresh legislative action by both chambers of the National Assembly emerged after a critical analysis of the Bill by Mr. President C – in – C.”

He stated that a Technical Committee of the Senate and House of Representatives and Directorate of Legal Services met and worked on the Bill.

Accordingly, the chamber rescinded its decision on the bill as passed and re-committed same to the Committee of the Whole for reconsideration and passage.

The Committees were all given four weeks to report back to the Senate in plenary.