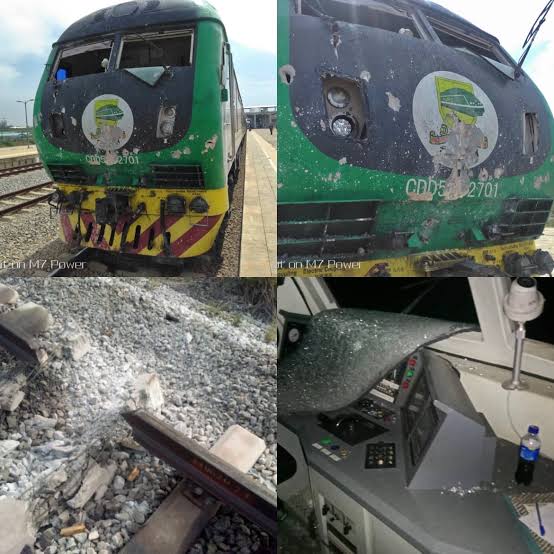 Lawmakers at plenary on Tuesday expressed anger over the new wave of insecurity that has shifted from the usual highway attacks to Airport and railway with privileged Nigerians as targets.

They blamed the new dimensions on failure of leadership on the part of the government at national level and in Kaduna State that has now become the new theater.
They spoke against the backdrop of the attack on the Kaduna train bound conveying about 970 passengers in which more than 50 were killed, while others sustained various degrees of injuries, as some were also abducted

In the late hours of Monday bandits planted explosives on the train track and demobilised it around Kateri and Rijana by 8pm.

Both the Kaduna State government and the Nigerian Railway Corporation (NRC) had since confirmed the attack and evacuation of passengers.

The NRC has since suspended train services between Abuja and Kaduna until further notice following the attack by bandits.

These were happening about seven months after bandits attacked the Nigerian Defence College, the Nigerian Defence College in the state, killing two officers and abducting one.
A Kaduna senator, Suleiman Kwari, had called on the National Assembly and the federal government to revisit talks of state police.
The National Assembly had ignored the clamour for state police by some governors and many other Nigerians in the Constitution amendment conducted last month.

The lawmaker representing Kaduna North senatorial district, made the call during plenary on Tuesday as the Senate deliberated a motion on Monday’s train attack.

“We had live chats with people that were caught in the unfortunate incident and was really scary.

“A woman with a baby in her arm in the ill fated train was calling for mercy that she had an aged mother by her side and was pleading that she came only for medical attention she was pleading for mercy instead of mercy she had her head shattered right before other travellers.

“Fortunately some of the military personnel had to induct some people on the act of crawling that was what saved the situation, many of them crawled from the VIP coaches to the economy coaches which helped in reducing the casualty. “Unfortunately the drones and other advanced technologies that have been advocated for have not been acquired by the government.

He said federal police, policing the roads and the forests is something that cannot stand, hence he renewed call for State police.

In his contribution, Mr Kwari who described the incident as pathetic, said state police would make the security of lives and properties easier.
“I think we need to look again, more closely to the call for state police because unless this is done, having a federal police policing our bushes and our roads is something that cannot stand,” he said.

While he lamented the delay in response time by the military, he commended them for “the last-minute intervention.”
Another Kaduna senator, Uba Sani, had raised a point of order on “the continuing attacks on Communities and public facilities in Kaduna State.”

In his motion, he said terrorists have in recent times stepped up attacks on some communities and public facilities in Kaduna State.
The lawmaker narrated how the incident took place,
“The latest attacks took place in some communities in Giwa Local Government, namely Angwan Sarki Yahya, Tashar Shari, Bare-Bari, Tsaunin Natal, Dillalai, Durumi and Jatin Kanwa, all on Yakawada Ward.
“Other places affected include Kaya community, Mai kyauro and Fatika where over 50 people were killed and over 100 kidnapped.
“Not done with their devilish acts, they made an attempt to penetrate the Kaduna International Airport.
“Although the attack was foiled by vigilant security operatives, one person lost his life. When people were trying to come to grips with a week-long wanton destruction of lives and property, the terrorists struck again.”

While the lawmaker complained that the attacks are aimed at instilling fear in the people and destroying economies, he questioned the strategies and tactics being adopted by security forces.
He also said the advocacy for creation of state police would bring law enforcement closer to the people.
“Effective gathering of intelligence and sustained security operations at the local level will make life uncomfortable for terrorists.”
On his part, Benue senator, Gabriel Suswam, blamed the recurring attacks on the failure of the leadership of the state.
He wondered why the Kaduna State government has done very little to stop the attacks and called on the leadership of the federal government to “address the issue.”
Like his colleague, Danjuma La’ah (APC, Kaduna Central) asked the state governor, Nasir El-Rufai, to speak up and call for help if he is overwhelmed.
After a lengthy debate which saw senators expressing anger, frustration and fear, the Senate called on the Army and Airforce to, as a matter of urgency, bombard terrorist enclaves with a view to restoring peace and stability in the country.
The Senate also called on the Ministry of Humanitarian Affairs, Disaster Management and Social Development, National Emergency Management Agency (NEMA) and other relevant government agencies to assist the affected communities with relief materials.
While they urged Nigerians to remain vigilant and report any suspicious movements to security operatives, the lawmakers asked the Military to put special focus on the vicinity of Nigerian Airports especially the Abuja Airport.
They also urged the relevant agencies of the government to step up their information gathering mechanism to forestall this kind of incident.
For the umpteenth time they observed another minute silence to mourn victims of the Monday night terror attack on Kaduna bound train.