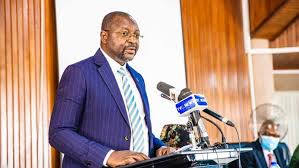 The Minister of Youth and Sports Development, Sunday Dare has inaugurated a Panel that will investigate the remote causes and the level of vandalism at the Moshood Abiola National Stadium in Abuja.
Director Press and Public Relations Mohammed Manga in a statement issued recently said angry spectators had resorted to vandalisation of facilities in the Stadium after the 2022 World Cup second leg playoff between Nigeria and Ghana which ended the Nigerian dream of featuring in the next world cup finals.
He quoted Dare, during the inauguration, to have stated that Nigeria’s failure to qualify for the Qatar 2022 World Cup is most regrettable but described the acts of vandalism as saddening and totally unacceptable to Government.

While assuring millions of sports loving Nigerians that necessary steps will be taken to deal with the issues that led to Nigeria’s inability to qualify, he advised the Nigerian youth to stop destroying public properties at the slightest provocation.

The Committee which has two weeks’ to complete its assignment and make presentation, has the following as its Terms of Reference; Finding the immediate and remote causes of the incident, Determining the extent of destruction, Investigating the role of the security agencies, Identifying the culprits and Making recommendations on how to prevent future occurrence.

Responding, the Chairman of the Panel of Enquiry, Rtd. DIG Sanni Mohammed on behalf of other members of the Committee assured that the Panel would discharge its responsibilities diligently in line with its Terms of Reference.