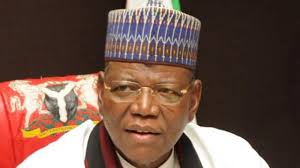 In a communique signed by former Vice-Chancellor, Ahmadu Bello University, Zaria, Prof. Ango Abdullahi, the Northern leaders said the election of Saraki and Bala Mohammed was arrived at based on certain criteria adopted in the assessment of the four aspirants who submitted themselves for the exercise.
“For the purpose of this exercise, it is hereby resolved that Gov.  Bala Mohammad from the North-East and former Senate President Bukola Saraki from the North-Central be presented as the Northern consensus candidates for the moment.

However in a swift reaction Lamido in his statement said,
“The attention of key stakeholders of the PDP in the Northern State has been drawn to reports in the Media that some Northern Elders have shortlisted two of our prominent and deserving aspirants as consensus PDP Presidential Candidates

“Having widely consulted Party Leaders across the 19 Northern States and FCT, it is hereby stated to our teeming Party members and the general public that what is reported in the Media is only the personal opinion of those who issued the statement and not the position of the PDP members in the North!”
He said discussions are ongoing with ALL the aspirants in the Party with a view to having a National Consensus if possible or at least working towards having a smooth acrimony free National Convention.